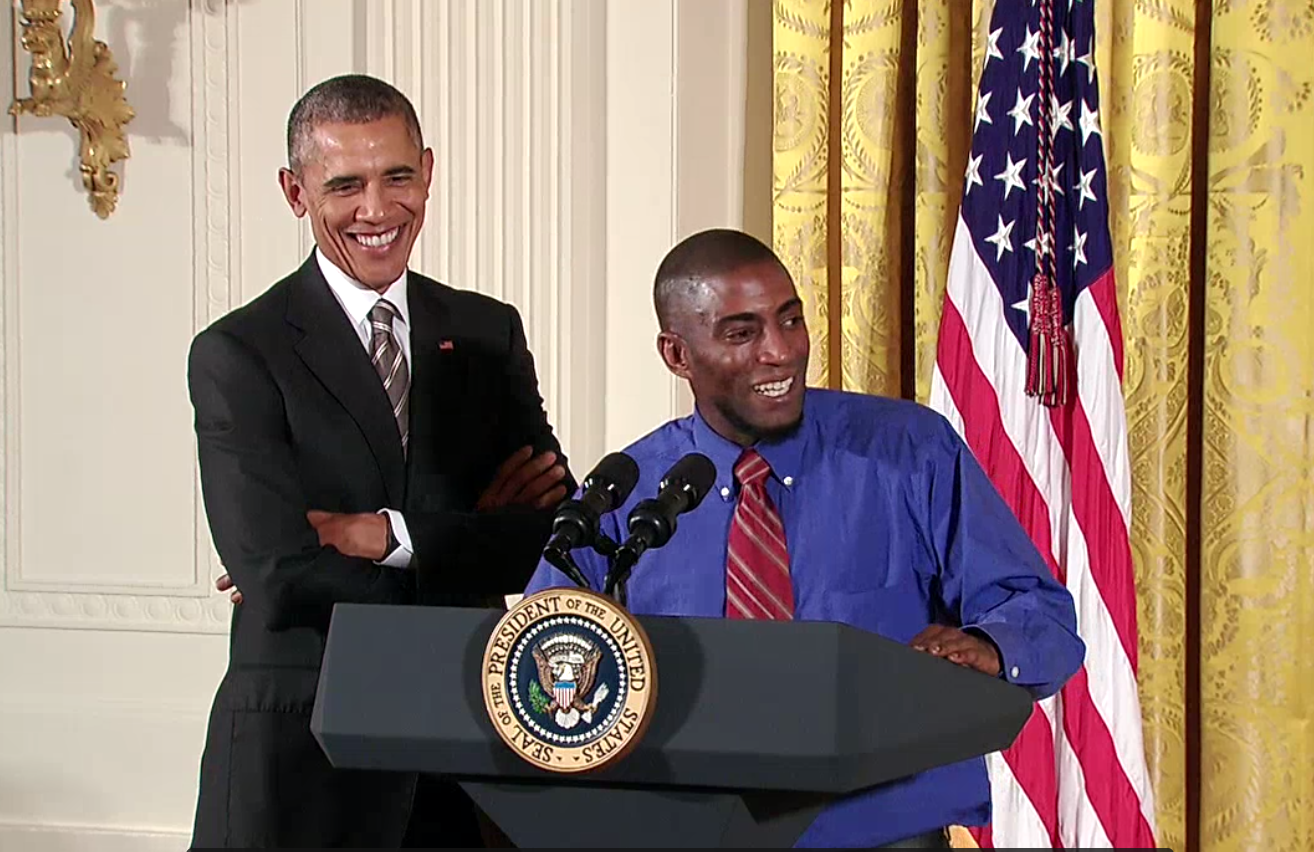 President Obama held up the Coalition of Kaiser Permanente Unions and our partnership with KP, as a model for empowering worker’s voices and using that influence to secure good jobs with good pay and benefits, during opening remarks Wednesday, Oct. 7, at a White House Summit on Worker Voice.

The summit gathered business and union leaders, workers and advocates to explore creative ways of giving American workers more voice on the job, and leveraging that voice to share in the profits they are helping to create — in the form of a living wage.

SEIU Local 105 LPN Sharon Davies from Colorado and KP’s Northern California regional vice president Greg Adams were among the selected attendees who participated at the summit.

In comments kicking off the summit, the President referred to the Coalition and our partnership with Kaiser Permanente as a successful model for giving workers a voice on the job and a voice in the quality of their jobs. It was held as a progressive example of partnering that benefits not only Kaiser Permanente in providing quality care, but also benefits the worker with good pay and benefits.

“There are businesses out there who are taking the high road and enlist their employees as partners in their shared future, and understand that if they’re investing in their employees and making them partners, that they’ll actually do better, not worse,” President Obama said.

“Kaiser Permanente works with 28 different unions to provide good pay and benefits, but also educational programs, and avenues for employees to help improve quality and care throughout the company — which is why they’re considered one of the premier health organizations in the country.”

Choosing mail order delivery for your prescriptions saves time and money. Head to kp.org/pharmacy to choose mail delivery for your next RX. Then go to unioncoalition.org/mail-rx-resources and help spread the word.Labor Management Partnership ... See MoreSee Less

Today, hundreds of Coalition of Kaiser Permanente Unions union members and our management partners came together for the first day of our Union Delegates Conference. It included a riveting discussion from our Labor Management Partnership tri-chairs Caroline Lucas, Jim Pruitt, and Steve Shields where they addressed the elephant in the room… "As we approach bargaining in our current partnership environment, how do we set ourselves up for success?"What do you think? ... See MoreSee Less

Do you know someone who is passionate about ensuri

Did everyone enjoy #InternationalWorkersDay yester

Today is Cesar Chavez Day! He was a national lead

The Coalition of Kaiser Permanente Unions is pleas

Women working together is a powerful thing. We o

Want to save time and money? Log onto http://kp.org and use the mail order pharmacy! Here's how (1 of 3):

The CKPU (Coalition of Kaiser Permanente Unions) seeks a Staff Director. This position is California based (but would also consider OR and WA applicants). Details can be found at: http://unionjobs.com/listing.php?id=21880 #1u #UnionStrong @UnionCoalition

Check out our new how-to video for finding team-tested practices in the April 2022 LMP Insider, then try them out with your unit-based team. https://mailchi.mp/lmpartnership.org/lmpinsiderforapril2022_20220413} #TransformKP #TeamTestedPractices #QI #PI

We are hiring! Join the Coalition's strong and dedicated staff and work with the amazing member leaders at @OPEIULocal2 in the Mid-Atlantic region to strengthen our voice at work through our union and the Partnership.

👏 Meet Caroline Lucas, our new Executive Director: first woman to lead the Coalition in its 26-year history, ready to work for more respect and support for frontline workers, and negotiate the largest union contract in healthcare together.
More at https://unioncoalition.org