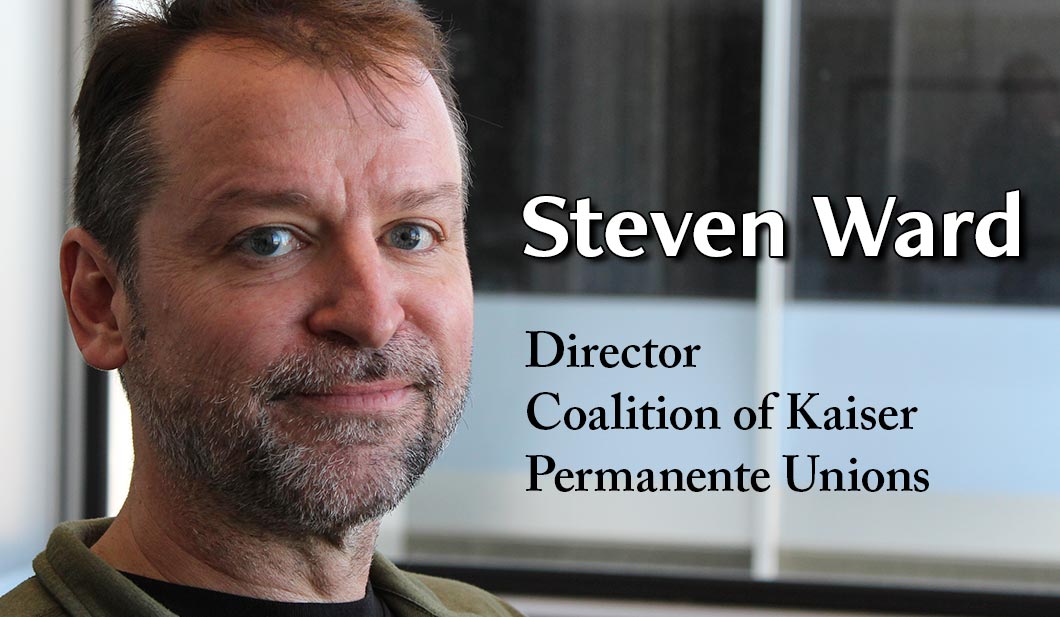 ​​​​​​​​​​​​​​​​​​​​​Effectively immediately, Steven Ward joins the Coalition as its new Staff Director, and Guillermo Galarreta as National Coordinator for Campaigns.​​​​​​​

Steven Ward comes to us from SEIU Local 49, where he was Health Care Division Director for eight years, leading both KP and non-KP workers in organizing and bargaining in Oregon and southwestern Washington. His 25 years of organizing work includes time with SEIU, AFSCME, and the International Brotherhood of Teamsters. As Organizing Director of SEIU Local 503 (Oregon), Ward helped create a statewide alliance between the union and a large portion of the nursing home industry — a labor-management partnership that’s increased union density, won increased funding, and raised standards for more than 10 years.

“I look forward to working with our Coalition unions and with Kaiser Permanente to revitalize our Partnership and to develop and implement strategic plans to meet our joint goals. This is an exciting opportunity for all of us — to strengthen our Labor-Management Partnership and ensure Kaiser remains a great place to work and a great place to receive high-quality affordable health care,” said Ward.

Guillermo Galarreta is a familiar face to many Kaiser employees: He coordinated the field campaign during our recently concluded bargaining, including targeted actions and strike prep. With more than 20 years at SEIU Local 503 (Oregon), SEIU International, and SEIU Western Region, Guillermo has organized thousands of nurses, nursing home workers and food service workers in California, Oregon, and Georgia. He also directed successful janitor strikes in Houston (2012) and Minneapolis (2015), and developed organizer training programs as well.

Galarreta has spent his career in health care. At the Seattle King County Health Department in the 1990s, he led the STD Outreach Project (SOP), which helped slow the spread of communicable diseases and improved access to care among underserved populations.

Finally, we want to express our deepest gratitude and appreciation for Walter Allen, who came out of retirement to take on the huge job of being the Coalition’s Interim Executive Director for nearly two years. His guidance, support, and leadership steered the Coalition safely and successfully through the stormiest time of its life. We wish him all the best as he returns once again to a retirement well earned.

The Coalition is excited to have Steven Ward and Guillermo Galarreta aboard as we work to implement our 2019 National Agreement and rebuild our Labor Management Partnership.

Choosing mail order delivery for your prescriptions saves time and money. Head to kp.org/pharmacy to choose mail delivery for your next RX. Then go to unioncoalition.org/mail-rx-resources and help spread the word.Labor Management Partnership ... See MoreSee Less

Today, hundreds of Coalition of Kaiser Permanente Unions union members and our management partners came together for the first day of our Union Delegates Conference. It included a riveting discussion from our Labor Management Partnership tri-chairs Caroline Lucas, Jim Pruitt, and Steve Shields where they addressed the elephant in the room… "As we approach bargaining in our current partnership environment, how do we set ourselves up for success?"What do you think? ... See MoreSee Less

Do you know someone who is passionate about ensuri

Did everyone enjoy #InternationalWorkersDay yester

Today is Cesar Chavez Day! He was a national lead

The Coalition of Kaiser Permanente Unions is pleas

Women working together is a powerful thing. We o

Want to save time and money? Log onto http://kp.org and use the mail order pharmacy! Here's how (1 of 3):

The CKPU (Coalition of Kaiser Permanente Unions) seeks a Staff Director. This position is California based (but would also consider OR and WA applicants). Details can be found at: http://unionjobs.com/listing.php?id=21880 #1u #UnionStrong @UnionCoalition

Check out our new how-to video for finding team-tested practices in the April 2022 LMP Insider, then try them out with your unit-based team. https://mailchi.mp/lmpartnership.org/lmpinsiderforapril2022_20220413} #TransformKP #TeamTestedPractices #QI #PI

We are hiring! Join the Coalition's strong and dedicated staff and work with the amazing member leaders at @OPEIULocal2 in the Mid-Atlantic region to strengthen our voice at work through our union and the Partnership.

👏 Meet Caroline Lucas, our new Executive Director: first woman to lead the Coalition in its 26-year history, ready to work for more respect and support for frontline workers, and negotiate the largest union contract in healthcare together.
More at https://unioncoalition.org